Is fencing dangerous? Does fencing hurt? These questions are frequently asked by people when they are considering fencing for their little kids. Well, as strange as it sounds – since the sport includes “hitting” each other with metal blades and so on – fencing is one of the safest sports in the world. Hard to believe?

According to research by Junge A, Engebretsen L, Mountjoy ML, Alonso JM, Renstrom PAFH, Aubry MJ, and Dvorak J (2009) from the University of Oslo, during the 2008 Olympic Summer Games, there were only five sports that had fewer injuries than fencing which were diving, synchronized swimming, rowing, kayaking, and sailing. The same study found that the most injuries occurred in soccer, followed by taekwondo, field hockey, handball, and weightlifting.  Additionally, the research illustrates that one third of all Olympic sports injuries were caused by contact with another athlete. In fencing, body contact is prohibited by the rules, and in certain situations, the athlete can be disqualified if the body contact was initiated.

Well, it is hard to believe, right? Let me explain a few things about fencing, as a lot of people imagine it to be Zorro slicing the other person’s outfit into pieces, making a “Z” on the shirt, or Musketeers who kill each other during breakfast, lunch, dinner or even during a glass of wine with their friends. Modern fencing is about scoring points with the tip of a very flexible, relatively light blade. The tip is not sharp at all which makes fencing very safe. The fencer’s body is fully covered with several layers of equipment made from Kevlar, which is the material used to make bulletproof jackets. (Of course, we did not try to shoot to test it, 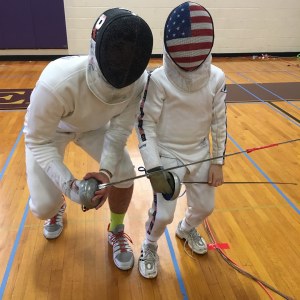 as we actually use fencing blades only.) The fencer’s head is fully protected with a mask that is made from metal mesh, which can withhold force much greater than the fencing blade.

There are myriad of studies you can find on the internet, and all of them depict that fencing is not considered a dangerous, risky or potentially high injury-causing sport.

Yes, injuries in fencing happen; however, they are mainly pulled or strained muscles, bruising, or sprains. With the proper training, warm-ups, stretching, etc., these injuries can all be prevented and minimized. After all, these same injuries happen while children play on the playground. As we can see, fencing has a very low risk of injury. Children, teens, and adults will find a lot of benefits as they discover the unlimited potential of the sport, such as focus, self-discipline, comradery, respect and more. These skills will help you throughout your life and will last lifelong.