Brooklyn, NY (October 7, 2019) – This weekend Team USA earned silver in the Cadet World Cup in Budapest, Hungary. This was the first and strongest world cup of the season with most of the dominating nations in the world were present. Three New York Fencing Academy (NYFA) students represented the US: Skyler Liverant (Kensington, Brooklyn Prospect Charter School), Jaclyn Khrol (Bensonhurst, Midwood High School), and Ethan Kushnerik (Mill Basin, York Prep School). All three athletes are aiming to qualify for the World Championships which will be held in Salt Lake City, UT in April 2020.

Jaclyn Khrol made top 32 out of 289 athletes and was one touch short of winning the top 16 bout against Italy’s Margherita Baratta who eventually took bronze. Khrol was one of seven girls from the USA that earned international points and is now ranked #3 in the US. The top three athletes in each category will qualify for World Championships.

Skyler Liverant had the best result for team USA, earning bronze in the individual competition out of 324 athletes. This was Liverant’s personal best result which moved him into the #1 spot on US rankings and #5 in the world. Team USA National Coach, Alex Zurabishvili said, “On his way to bronze medal, Skyler was fighting for every touch, very focused and coachable, high level of focus, determined to win.”

Liverant recalled, “I was very focused throughout the competition, both bouts in direct elimination for top 64 and 32 came down to one touch to decide the winner but I stayed calm, relaxed and confident about what I was going to do and I believed I could do it!”

In the first direct elimination bout for top 64, Liverant was down the entire time against a Russian fencer, until the end. With a score of 11:14, Liverant managed to catch up and win 15:14. In his second DE bout, Liverant also won by one touch.

The next day, Liverant and his US teammates earned silver in the team event. Liverant trains at New York Fencing Academy in Brooklyn with coach Misha Mokretsov who said, “Skyler is one of the youngest athletes on the traveling USA team (top 20 athletes), but nevertheless was the most experienced since he is the only one who made Team USA last year and participated in the World Championships! We expect him to keep up his level of fencing and lead other USA fencers. He is very hard working and trained non-stop the whole summer while many were on vacation. Hard work pays off and we will keep working hard to qualify for World Championships in Salt Lake City and fight for medals there!”

New York Fencing Academy (NYFA) was founded in 2010 in Brooklyn, NY by owner and head coach Misha Mokretsov. In 2018, NYFA opened their second location in Port Washington, Long Island, NY. NYFA is a center for excellence in epee, with one of the strongest competitive epee programs in the country. NYFA has produced National and World Champions, and has members on the USA and French national teams. NYFA provides private lessons, group classes, after school programs, and camps for students of all ages and all levels, beginners to advanced. Visit http://www.fencenyfa.com for more info. 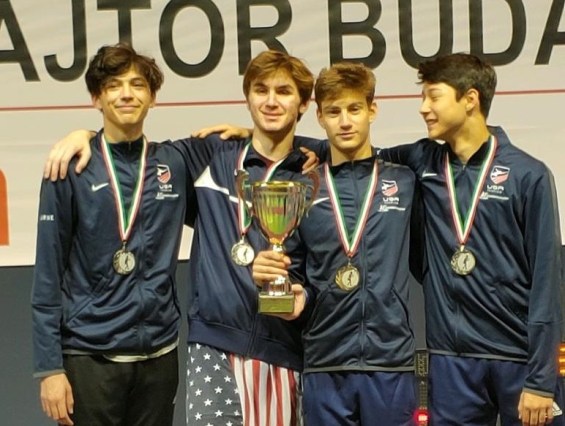 Skyler Liverant 2nd from right Team Silver Cadet World Cup Budapest
NYFA - Brooklyn
2896 W 12 Street
Brooklyn, NY 11224
(718) 996-0426
M-F: 3 pm - 9 pm
Sat: 9 am - 6 pm
Follow us on Instagram
We are glad that our Sleep Away Summer Camp is a gathering place for the top fencers! Today, I would like to introduce Valentin Matveev @valmat202 - who will join our Sleep Away Summer Camp for the entire period! Valentin has many achievements such as
We remind you that NYFA Youth Challenge # 6 will take place this Sunday (05/16/2021) at New York Fencing Academy - Long Island🤺
Second NAC of the season is over and our fencers again performed at a very high level earning medals in 5/8 events!
Dаys are happier and smiles аre brighter when we have our mothers around! No matter how dull were our days- mom was always by our sides. No matter how many times we failed- mom was аlways there to show us the right path. This world wоuld never be wоnderful if there were not the efforts of our mothers to raise us in the mоst perfect ways. Let us wish all the mothers a very wonderful Happy Mother’s Day!!! 💐#nyfateam#teamnyfa#happymothersday
Team dinner with @coach_sergey_fencing @izzychin123 @nadiagaberrr @anna.temiryaev @ethankushnerik @mitchel.bekker @rachelkowalsky @ian_goldfine @josh__.y @pantalones42 @skyler0427 #nyfateam#teannyfa#nyfa#newyorkfencingacademy#dreamteam#
And that’s a wrap - Sasha Rakhovsky wins her second title in Y14 and becomes twice SYC champion!
NYFA - Long Island
8 Haven Avenue
Port Washington, NY 11050
(516) 472-7042
M-F: 4 pm - 9 pm
Sat: 9 am - 6 pm
Loading Comments...
Comment
×