Anton started fencing at age 12 in Khmelnitsky, Ukraine. At 13, he began to study and train in fencing at Republican High School of Physical Culture.

Anton is a two-time winner of the Ukrainian Junior Team National Championship, and was a member of the Cadet National Epee Team in 2008. As a national team member, Anton competed in numerous cadet and junior World Cups. 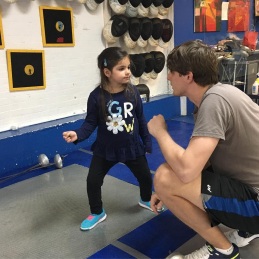 He graduated with a bachelor’s degree from National University of Physical Education and Sports of Ukraine in 2013. He also earned a master’s degree in Fitness and Recreation in 2014.

NYFA - Brooklyn
2896 W 12 Street
Brooklyn, NY 11224
(718) 996-0426
M-F: 3 pm - 9 pm
Sat: 9 am - 6 pm
Follow us on Instagram
Congratulations on the first medal to date at the North American Cup 2021, Fort Worth, Texas - Mia Smotritsky @miamarienyc made Top 8, Liza Zigalo @elizabethzigalo -top 18th place. Mia Tsiporukha - we congratulate you with your first NAC. Good job girls ! 🎉🎉🎉🎉🎉🎉#northamericancup#nacfencing#fencinglife #nac2021
Today was a big day for Skyler Liverant, me personally and our club! Skyler fenced his heart out and earned a bronze medal at FIE Cadet World Championships in Cairo, Egypt! It’s a huge achievement for athlete and coach - it’s the first Worlds medal for both of us and I’m sure we will remember this day forever - thank you for that!
Congratulations to Jaclyn Khrol on her top 8 finish at Junior World Championships! It was a hard day and Jackie pulled amazing combat in the bout for 32 - she equalized the score .007 seconds left and won on priority! Jackie was one touch short for the medal! Even though it’s upsetting to be so close and lose I would like to say that Jackie fenced amazing today and we are very proud of her! She will return for team event on Sunday!
Congratulations to our kids who were collecting more medals all over from Pensilvania to Texas!
Our kids continue to collect gold! Congratulations to David Dodin - Y12 champion and Liora Profis Y10 champion at American Challenge RYC! #goldrush #youngchamps #ryc #top #fencenyfa #teamnyfa
Here are some fun videos from last camp! Hope to see you back this summer for more fencing and fun!
NYFA - Long Island
8 Haven Avenue
Port Washington, NY 11050
(516) 472-7042
M-F: 4 pm - 9 pm
Sat: 9 am - 6 pm
Loading Comments...
Comment
×